A Thanksgiving Memory on 3 Wheels

Being a retired police officer makes for some interesting memories; take for instance a thought which ran through my mind this morning, “I won’t have to get up early to work the Thanksgiving’s Day Parade tomorrow”.  Mind you, I’ve been retired from the Houston Police Department a little over twenty years, and beyond that; the last Thanksgiving’s Day Parade I actually worked was thirty years ago.

In the early to late 70s I was assigned to Point Control Division, the folks who stood in the intersections during rush hour traffic to mess things up for drivers on their way to or from work.  At one time we rode Harley Davidson 3 wheeled motorcycles because they could maneuver through downtown traffic easier than a regular patrol car; on sidewalks if need be. 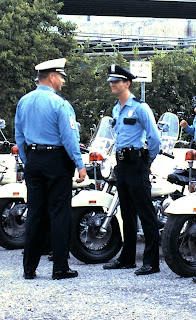 My old partner, R.C. Kersten, talked me into transferring from evening shift Patrol over to Point Control; a decision based on the idea it would be easier to learn how to operate a 3 wheeled monster than to find a good partner.

“Sign me up”; never ridden a motorcycle of any kind in my life; but “Sign me up”.

I learned that leaning toward the desired direction did absolutely nothing on a 3 wheeler; you had to pull left or right on the handlebars, much as if it were a steering wheel.  A week or so of training on the back parking lot of the police station and one partially wrecked 3 wheeler later (gotta’ remember, leaning does no good at all) they turned me loose on the public.

Other than directing traffic at rush hour, something I took to like a duck to water; Point Control was used for a variety of traffic related tasks, parades were on that list.  The Thanksgiving Parade was the jewel in the crown, a chance for the “city’s finest” to shine.

On Thanksgiving Day there was an unwritten rule, if you called in sick you’d better be wearing a toe tag.

Point Control officers would be stationed at every location which had anything remotely associated with the parade and we had to be in the roll call room promptly at 5am (it might have been 6am; but that was a long time ago) for a parade which would start at 10am.  Why so early; it made little sense other than it gave supervisors time to call and chew out any officers who might have slept in late.

My partner and I left roll call to go have breakfast at my folk’s house since they lived very close to town.  We enjoyed a meal prepared by my mom and killed a couple of hours visiting before heading back into town.

The streets on the edge of downtown were empty for the most part; the only activity being on or along the parade route.  Kersten and I drove our 3 wheelers north on Louisiana Street, passing under the Pierce Elevated with the morning sky brightened by the sun peaking in between buildings.

Off on the left was the old YMCA building with a lone pedestrian casually walking on the sidewalk, a boom box planted on his shoulder next to his ear.  My partner and I had the same thought, “Let’s have some fun”.

I should mention that 3 wheelers were not equipped with a siren; they had a cheesy little red light perched on a pole, but no siren.   It had a feeble sounding horn; yea, like folks are going to hear that…

My partner and I learned that if you locked up the front disc brake, keeping the throttle open full at the same time, then pull hard on the handlebars as if to turn; the leading edge of the front tire would grind along the pavement and make a horrendous sound, much like what you’d hear moments prior to a major traffic accident.  That became our “siren”.

Back to the unsuspecting pedestrian strolling down the street oblivious to anything but James Brown blasting out of his boom box.  Without saying a word we both “turned on our sirens”.

The fellow panicked, his knees buckling while he attempted to get out of harms way.  The YMCA had a shallow concrete retaining wall next to the sidewalk which made his first attempt fail.  He found his second wind half a moment later and was able to clear the sidewalk; not sure what became of the boom box to be honest.

Partner and I let loose of the brakes and continued toward our assignment.  Santa Claus was on his way so we’d be escorting his sleigh at the end of the parade with our 3 wheelers.  Naturally our names would be on the Good Little Boy’s List as we protected and served the public.

A note in passing, the officer in that old photograph, the skinny guy standing next to the 3 wheeler; that’s me back in the day.

This article has been cross posted to The Moral Liberal, a publication whose banner reads, “Defending The Judeo-Christian Ethic, Limited Government, & The American Constitution”.
Posted by T. F. Stern at 10:43 AM