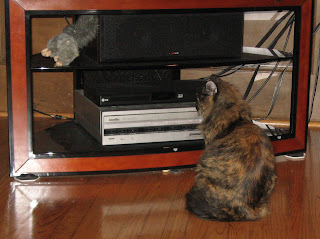 Pumpkin has become an “inside” kitty and learned to enjoy some of the modern conveniences.  Indoor hockey with walnuts or balled up pieces of scrap paper is high on her list as she scrambles to keep traction on the hard wood floors, sliding hard into furniture or walls is half the fun; but watching the DVD player seems to have captured her attention of late.  She can be on the other side of the room and hear the cassette door open, the mechanized sound as the motor pushes the tray outward draws her like a magnet.

She’ll sit patiently studying the lights on the control panel; but I don’t think she knows what it says on the display, only that when it’s glowing interesting things happen.  As soon as we hit the remote button the tray is pulled back into the body of the DVD player and Pumpkin, being a Southpaw, jabs ever so quickly slapping the tray once or twice as it retreats to safety.  Pumpkin will wait patiently for another chance; sometimes we offer it to her immediately while other times lulling her into thinking all is safe.  She’s taken up surveillance for as long as an hour, looking away now and then as if to fool the DVD player into believing it no longer matters.

While You Were Fleeing…

Sandra Bullock played a woman in love with a stranger who happened to fall into the path of an oncoming train in the movie, While you were sleeping.  Things got out of hand when she told the nurse at the hospital she was his fiancé and the story took off from there.  Eventually she had to fess up for her actions; but it all worked out and she lived happily ever after.

Closer to home, a young man was arrested here in Houston and charged with Felony Murder, a peculiar offense which covers unintentional deaths which are the result of entering into criminal behavior.  The young man “allegedly was involved in the felony of burglary” and had admitted to having been caught red handed prior to his fleeing the scene and leaving his fellow burglary suspect behind.  His partner in crime was shot by a police officer while wrestling for the officer’s gun according to the official report.

Legal scholars said felony murder is unusual and can be invoked in a number of situations.

“You see them in textbooks and occasionally in news stories, but they’re rare by comparison to your average homicide, obviously,” said University of Houston law professor Adam Gersho­witz. “Felony murder is controversial anyway, and this is holding someone criminally liable for an unintentional murder of their friend, while they’re away from the scene.”

If you follow that line of thought then criminals aren’t responsible for bad things that happen when their plans go sour.  The lazy cop just started blasting away, too lazy to chase some kid on foot; it’s all the cops fault.  The burglary suspects only wanted to break in, steal some stuff and leave; they never intended for anyone to see them, scream out for help, call the cops and they certainly didn’t plan on getting shot.

You read about things like this all the time; a robber goes into the liquor store to grab some quick money and “accidentally” shoots the owner of the store.  “It wasn’t my fault, he grabbed for my gun and it just went off”.  An auto thief grabs an SUV and takes off, unaware there’s a baby in the back seat, leaves the child abandoned in the cold night air and wonders why he’s being arrested for kidnapping.  This happens all the time.

Geoffery Corn, a professor of law at South Texas College of Law summed it up best:


“A reasonable person would foresee that the conduct you engaged in could lead to the death of someone - a cop, a home-owner or maybe even your co-felon,” Corn said. “Felony plus death equals murder.”

This article has been cross posted to The Moral Liberal , a publication whose banner reads, “Defending The Judeo-Christian Ethic, Limited Government, & The American Constitution”.
Posted by T. F. Stern at 9:59 AM 1 comments