Is the Center for Disease Control and Prevention Useless?

The Center for Disease Control and Prevention (CDC) has been in the headlines of late as Ebola takes center stage.  The CDC, your tax dollars at work, advertises in its banner, “CDC 24/7: Saving Lives, Protecting People TM”.   Perusing their website gives you an idea of the importance placed on certain aspects they consider top priorities.
.

# Flu Season is Around the Corner

Then I read where a doctor who had been a volunteer working in an Ebola field hospital had returned to the United States, landed at New York’s JFK airport and given the ‘all clear’ by the CDC to go about mixing and mingling with the general population.  The only problem…the doctor wasn’t quarantined for any length of time and, as it turns out; you guessed it, the good doctor is infected with the Ebola virus.

“The doctor, Craig Spencer, 33, returned from Guinea 10 days ago after treating Ebola patients there. Since returning, Spencer rode the A, L, and No. 1 subway lines, went running, used an Uber livery cab, and went to a bowling alley in Williamsburg called the Gutter Wednesday night, said Dr. Mary Bassett, the city’s health commissioner. He also visited the High Line park in Manhattan at some point, she said. He began exhibiting a fever and diarrhea on Thursday morning,
Obviously this doctor was high risk – so what was he doing on a plane, subway, and cab, then running and bowling in public places?! And how did he miss out on taking the ferry and LIRR, for good measure? Maybe those were his Thursday plans before he got sick.”
I’m so glad the CDC, that government agency using our tax dollars, “24/7: Saving Lives, Protecting People TM”, that CDC did such a good job containing a person they knew had been in contact with a contagious disease.  Just think about the folks that the CDC has no clue about, those coming through our open borders since things like that are not important to the Obama administration.
What about communicable diseases which are now being imported to the heartland of the United States from those who are not checked as they are welcomed with open arms and placed in our public schools?  Where is the CDC’s response warning everyone of the dangers of coming in contact with active Tuberculosis or God-knows what else has been brought here? 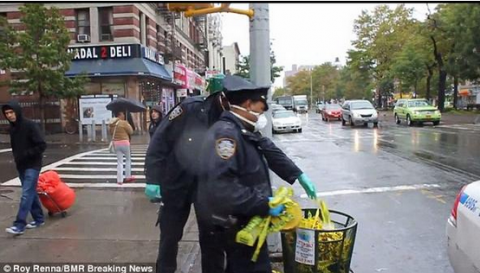 Maybe the CDC should share proper protocols for dealing with Ebola contaminants with those who are working first hand with this crisis… like these two police officers who, after visiting Ebola patient Dr. Craig Spencer’s apartment in New York City decided to toss their safety masks and gloves in the nearest public trash can.
Moving right along…  We’ve been told by the CDC to get a Flu shot each year; but how effective and/or dangerous is the vaccine?

“A Johns Hopkins scientist has issued a blistering report on influenza vaccines in the British Medical Journal (BMJ). Peter Doshi, Ph.D., charges that although the vaccines are being pushed on the public in unprecedented numbers, they are less effective and cause more side effects than alleged by the Centers for Disease Control and Prevention (CDC).”

“Not only is the vaccine not safe, Dr. Blaylock tells Newsmax Health, it doesn’t even work. “The vaccine is completely worthless, and the government knows it,” he says. “There are three reasons the government tells the elderly why they should get flu shots: secondary pneumonia, hospitalization, and death. Yet a study by the Cochrane group studied hundreds of thousands of people and found it offered zero protection for those three things in the general community.” (emphasis added)

The government’s pushing a Flu vaccine they know doesn’t work while using their arm twisting powers to force individuals to subject themselves to possible dangerous side effects, either that or lose their jobs; just wonderful.  This is the same government agency that can’t figure out how to keep one Ebola infected individual from exposing the population to this dreadful disease.

Exactly how much money is being wasted by taxpayers to keep the CDC up and running?  For years the CDC has been pushing a Low Salt Diet, saving us from consuming too much Salt even though recent scientific studies published in the May 4 issue of The Journal of the American Medical Association don’t support the claim; to the contrary, “The investigators found that the less salt people ate, the more likely they were to die of heart disease…”

Saving us from catching the Flu even though the vaccine they’re promoting doesn’t work, limiting our Salt intake even though no conclusive data justifies it and making sure our society never comes in contact with Ebola; yea, they’re doing a great job.  Going down their list of priorities, at least these boobs have a handle on breast cancer.

The CDC is another example of government employees sucking the public teat and providing little if anything in return.

This article has been cross posted to The Moral Liberal, a publication whose banner reads, “Defending The Judeo-Christian Ethic, Limited Government, & The American Constitution”.
Posted by T. F. Stern at 1:59 PM 0 comments

Sowing the seeds of destruction 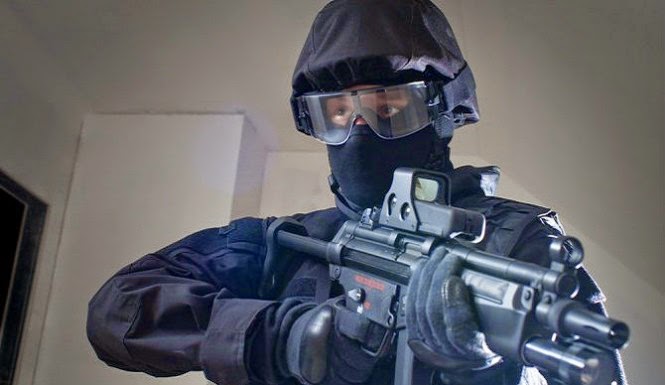 Bear with me as the pieces of a puzzle are placed before your eyes, a chance to see how the seeds of constitutional destruction are sown.   If I were to tell you that storm troopers from our government planned to come to your house tomorrow without a warrant, kick down your front door, throw you to the floor as they placed handcuffs on each member of your family prior to carting everyone off to a re-education FEMA camp and at the same time executed a search of the house, confiscating any firearm you might have; would this sound possible or is that something so remote as to be considered…crazy?

If you’re into politics or social media it isn’t hard to find folks bashing their opponents, not necessarily with facts; rarely are facts important; but with insults simply because they can.  If you don’t agree with this, that or the other; you must be…crazy.

“Conservatives are crazy. Sometimes they’re stupid, racist or even evil. On creative occasions they’re all four – at least that’s how they’re portrayed by the American media.”

It gets bandied about in light conversation or by the news media, most often when referring to individuals or groups of individuals who express opinions which don’t comply with the opposition’s; but, it’s also considered a medical term, one that identifies individuals who are a threat to themselves or others.  For example, “Those crazy Tea Baggers, can you imagine what our country would look like if they ever got elected?”

“Insanity, craziness or madness is a spectrum of behaviors characterized by certain abnormal mental or behavioral patterns. Insanity may manifest as violations of societal norms, including a person becoming a danger to themselves or others, though not all such acts are considered insanity. In modern usage, insanity is most commonly encountered as an informal unscientific term denoting mental instability, or in the narrow legal context of the insanity defense. In the medical profession the term is now avoided in favor of diagnoses of specific mental disorders; the presence of delusions or hallucinations is broadly referred to as psychosis.[1] When discussing mental illness in general terms, "psychopathology" is considered a preferred descriptor.”

Statist propaganda has been applied toward anyone who holds the 2nd Amendment as important in our day as well as those who challenge man made global warming as a hoax.  Call it Climate Change, Global Warming or what ever you want; the end game is a totalitarian power play to enslave each and every individual on this planet via an imposed world wide governance system concocted and promoted by the United Nations.

If you don’t jump on the Climate Change bandwagon you must be…wait for it…crazy, delusional or a ‘denier’; similar to the Flat Earthers…and we all know how insane those folks are.   Lest I forget, these folks only watch Fox News which explains their break with reality. 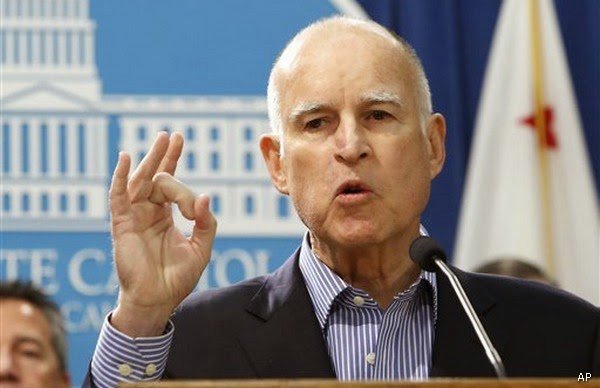 Enter Gov. Jerry Brown and the anti-2nd Amendment crowd, those who want to confiscate any and all firearms from law abiding citizens because they think anyone who owns a gun must be…crazy.   There’s a bone chilling article by Terresa Monroe-Hamilton, If You Are Deemed A Threat, They Are Coming For Your Guns – Now In A State Near You, which points to the slippery slope we now are being swept down by the gun grabbers who don’t agree with or support our Constitution, even those who raised their arm to the square pledging to support and defend the Constitution when elected to positions of government.

“Governor Brown just signed a gun confiscation bill that should send a chill down America’s spine. California leads the way, right off the Constitutional cliff, by becoming the first state that allows family members to ask a fascist judge to confiscate guns from a relative that they believe is a threat.”

Let me guess, you get a free Brown Shirt any time you turn in a relative.  For those not up on their history that’s a direct reference to NAZI Germany and tactics employed to keep the masses in line.

Make no mistake folks; a large portion of our society doesn’t like Constitutional protections, God given inalienable rights, afforded individuals.  They have vowed to radically transform our country given half a chance.  Obama depends on useful idiots to pave the way and has managed to hold the Oval Office long enough to implement many of his Executive Orders which are nothing less than the seeds of our constitutional destruction.

This article has been cross posted to The Moral Liberal, a publication whose banner reads, “Defending The Judeo-Christian Ethic, Limited Government, & The American Constitution”.
Posted by T. F. Stern at 2:27 PM 0 comments