My son came up to visit and brought me a Trump flag/banner to display from my house up here in .  He didn’t want to attach it to the house in , fearing it might bring out the worst in some folks who lack civility at most any level.  Can’t say I blame him, having seen some of the nonsense that’s been going on in our country.

So here’s the Trump banner, proudly waving in the breeze as it’s wedged in between the top railing of my porch and the roof overhang.

I’m not sure I like Trump as much as so many of his supporters; but at least he loves America and is doing what he can to expose the ugliness of the folks in Congress who keep trying to destroy this nation.

Several years ago when Obama was running for the presidency, a good friend of mine, Terrell Hunt, (may he rest in peace), was backing Obama's candidacy and put up a huge ‘Obama for President’ banner to hang from the entryway to his house.  I was on my way home in the evening and noticed it; how could you not notice it?

Terrell and I didn’t see eye to eye on most anything political; but we were brothers in the gospel of Jesus Christ and treated each other with the highest respect and love.  Lucy and I would go over and visit with the Hunt family regularly and joke about our differences, chiding each other here a bit and there a bit; but always knowing our friendship was more important than any political issue.

I decided to call Terrell in the morning to chide him about the ‘Obama for President’ sign.  When he answered the phone I explained, “Someone vandalized your house last night.”

Terrell was a bit angry as he replied, “They sure did…they wrote nasty stuff all over my brand new ‘Obama for President’ banner.”  Turns out someone had actually ‘vandalized’ his home by spray painting across his political hero’s banner.

His response caught me completely off guard, and from the way he paused, let me know that perhaps he considered me the culprit since I knew about it as the sun was coming up.  I assured him I had no idea that someone had spray painted over his Obama banner; that I was joking with him for having put the banner up in the first place.

Timing is a funny thing and it’s a shame Terrell passed away a couple of years ago; he was a true friend, and I can’t say that about too many folks who claim to be Democrats…

Terrell’s probably looking down from the Heavens at my house here in , wishing he could call me on the phone, “Hey, Brother Stern, someone came by your house and vandalized it.”  Yes, I can see him laughing into the phone and wondering if I too have a sense of humor big enough to let him get away with such a line.
Posted by T. F. Stern at 6:20 PM 0 comments

An American in Paris - Gershwin CD 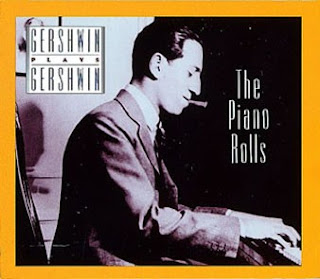 Being restricted somewhat from movement away from the house to a certain degree has permitted an extensive use of music playing in the background while accomplishing other chores.  We are blessed to have Pandora Radio going most of the time, with my favorite location, the Gershwin Station, a collection of similar music.

As I was going over recent Facebook entries I found my mind wandering as they had the American in Paris on, as found on the CD, Gershwin Plays Gershwin – The Piano Rolls .  The piano rolls were played on a “Yamaha Diskclavier, a computer-driven descendant of the player piano”.  The quality of these  performances is breathtaking.  (If you like Gershwin music I recommend this CD for your collection)

Now for a little piece of history on this particular cut; …how it was produced. I’ll copy the information as presented in the booklet provided when I purchased this wonderful recording.

“The Last selection on this CD is Frank Milne’s 2 roll arrangement of An American in Paris, Cut in 1933, it is one of the most impressive and powerful roll performances of the era.  After the crash of the piano roll industry, the severely curtailed Aeolian Company kept Milne on as its lone roll editor and ceased using performing artists.

According to Milne’s children, by that time and probably much earlier he was so skilled at arranging that he did not need a recording apparatus to generate the performance.  Much as a composer notates a score, he prepared roll masters by drawing lines on a roll of special graph paper which served as a template for perforating the holes. The roll of An American in Paris is identified, however, as being played by Milne and “”.  We now know that “” was one of Milne’s pseudonyms; to put an arrangement of this complexity forward to the public, it had to be represented as a 4-hand performance.

We have no evidence that Gershwin supervised Milne’s arrangement of An American in but the arranger had previously worked with Gershwin on his late Duo-Art song rolls.  Milne’s version of An American in Paris ingeniously evokes not only the full sonority of an orchestra but also the vitality of a live performance.” 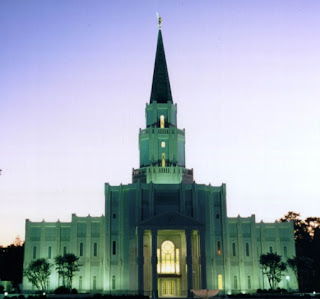 Later in President Nelson’s talk he spent considerable time talking about the blessings found by attending the temple. Sisters working as Ordinance Workers perform these ordinances by using priesthood power, the same priesthood power that created this earth, the same priesthood power the Brethren use. Each time you present yourself as a patron or worker at the temple you become “armed with God’s power and His angels having “charge over” you.” These are the Spiritual Treasures we should be seeking as we find the joy in becoming more like the Savior.
Isn’t that always going to be the case? Satan wants you to be miserable like unto himself. The more you seek to follow the Lord, the more tricks and ploys Satan will use to act as stumbling blocks, hedging up the way before you.
“Satan and his minions will constantly contrive roadblocks to prevent you from understanding the spiritual gifts with which you have been and can be blessed. Unfortunately, some roadblocks may be the result of another’s misbehavior. It grieves me to think that any of you have felt marginalized or have not been believed by a priesthood leader or have been abused or betrayed by a husband, father, or a supposed friend. I feel deep sorrow that any of you have felt sidelined, disrespected, or misjudged. Such offenses have no place in the .”
President Nelson expects us to do our part while seeking these Spiritual Treasures as found while exercising the power of the priesthood.
“I entreat you to study prayerfully all the truths you can find about priesthood power. You might begin with Doctrine and Covenants sections 84 and 107. Those sections will lead you to other passages. The scriptures and teachings by modern prophets, seers, and revelators are filled with these truths. As your understanding increases and as you exercise faith in the Lord and His priesthood power, your ability to draw upon this spiritual treasure that the Lord has made available will increase. As you do so, you will find yourselves better able to help create eternal families that are united, sealed in the temple of the Lord, and full of love for our Heavenly Father and for Jesus Christ.”
While President Nelson’s remarks were mostly directed to the Sisters, he was quick to include:
“I hasten to add that I do not absolve men in any way from God’s requirement for them also to distinguish between right and wrong. But my dear sisters, your ability to discern truth from error, to be society’s guardians of morality, is crucial in these latter days. And we depend upon you to teach others to do likewise. Let me be very clear about this: if the world loses the moral rectitude of its women, the world will never recover.” (emphasis added)
It would seem our work is cut out for us. Satan and his minions will always be trying to ensnare us as we strive, diligently at times or barely striving when feeling lazy. The fact remains that Spiritual Treasures have been prepared for each of us as we follow the promptings of the Spirit during our probation here in mortality.
The gems you find, while they may not be as tangible as the silver knife found when I was just a boy, will be recognized as priceless gifts from the Lord. It is my prayer that we take President Nelson’s words into our hearts as we labor in His vineyard.  In the name of Jesus Christ, Amen.
This article has been cross posted to The Self Educated American, a publication whose banner reads, “Standing Fast By the Judeo-Christian Heritage, Limited Government and the Constitution”. 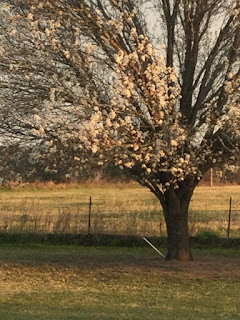 One of the joys in life is watching nature, simple and glorious at the same time.  Take for example the promise of springtime that follows winter as trees, bushes and grasses remind us to be grateful for the beauty supplied by our Creator.

We have a tree that just began flowering; becoming more spectacular each passing day.  It last for about a week as the white petals are then replaced with lush green leaves.  This happens before our pecan trees give any sign that winter is over.  Today that tree is nearly covered with white blooms and the evening sun gave it the impression of being on fire.

I thought of the Sermon on the Mount as found in Matthew 6, where the Lord teaches his disciples to seek after the and His righteousness.  More specifically, He’s teaching all of us to appreciate and be grateful for life itself; not worry about things too much since He’s in charge.


“And why take ye thought for raiment? Consider the lilies of the field, how they grow; they toil not, neither do they spin:


And yet I say unto you, That even Solomon in all his glory was not arrayed like one of these.”