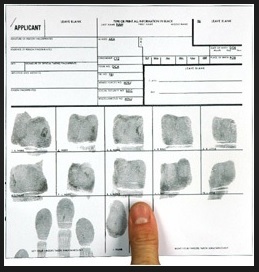 Recently the State of Texas altered the requirements for the renewal process licensed locksmiths must complete in order to continue applying their skills in what used to be a free market system.  The Department of Public Safety/Private Security Bureau, (DPS/PSB) working under their interpretation of HB 4030 passed during the 84th session, has determined that locksmiths must have yet another set of official fingerprints submitted along with a complete background check in order to maintain a valid locksmith license.

While visiting my father, holding his aging hand as we watched some insignificant golf show on the television, I noticed his fingers were a bit discolored as his circulatory system no longer functioned at peak efficiency.  It’s just a guess; but you could bet the farm the fingerprints on his hands would be the same ones he’s had since birth, the same ones he had when he signed up with the Navy in WWII and the same ones he’ll have when he meets St. Peter on the other side of the veil.

Some where in Washington, as the singer Arlo Guthrie would point out in his tune, Alice’s Restaurant, there’s a study in black and white of his fingerprints…

These identifying marks don’t change all that much over time so it’s beyond my thought process as to why the State of Texas considers it necessary, requiring locksmiths to furnish a fresh set of these prints simply to renew a license... a license which has that very same set of fingerprints already tied to it and filed away collecting dust.

About the only thing such a requirement does is add $25.00 to the cost of doing business for each and every locksmith while accomplishing absolutely nothing towards the State of Texas’ goal, “protection of the public through fair and impartial regulation of the Private Investigations and Private Security Industry”

Then there’s the requirement of another complete and thorough background check in order to maintain an already issued locksmith license; that bothers me too.  Actually, the veins in my neck are pulsing and may explode while thinking about this.

The State of Texas conducts a complete and thorough background check of each individual prior to issuing a locksmith license.  If the State wants to find out whether or not a licensed locksmith has committed a noteworthy criminal act since the last time he/she went through the licensing process then all the State’s investigators would have to do would be to bring up a standard criminal check on their computer, not much different than the way police officers are able to find out the same information while on patrol; it takes only a minute, sometimes less.

Yesterday I received an email from the DPS/PSB letting me know my latest renewal efforts were finally accepted and that my pocket sized wallet card would be sent in a timely manner.

Do you see why the updated renewal process bothers me?

This article has been cross posted to The Moral Liberal, a publication whose banner reads, “Defending The Judeo-Christian Ethic, Limited Government, & The American Constitution”.
Posted by T. F. Stern at 4:51 PM 0 comments

My locksmith license is up for renewal, something which happens every other year.  Lucy decided to use the new easy and convenient on-line service provided by the Texas Department of Public Safety/Private Security Bureau (DPS/PSB).  Locksmiths in Texas were forced into being licensed in 2004 and we have submitted to our masters ever since, paying the state for the privilege to apply our skills.

On August 30th, while I was out of town on family business, Lucy attempted to use the State’s internet forms so that my locksmith license would be updated in a timely manner.  The internet forms had some ‘glitches’, at least that’s what Ryan Garcia of the DPS/PSB explained as he reassured us the licensing renewal process would eventually work as planned.

Looking at the required fields I found it odd that the DPS/PSB was requiring a DD 214.  I actually have one showing my honorable discharge from the U.S. Army back in 1971.  Not sure why the State of Texas considers military experience a requirement for obtaining a locksmith license; but I’ll send them a copy if they actually need it.

I’m a bit confused regarding their need for a Background Check seeing as how that should already be in their files; my having been licensed back in 2004.  Did they lose all that important data?

Perhaps the DPS/PSB has been renewing my locksmith license all these years and never bothered to do the original background investigation; wouldn’t that be a hoot…

Hmmmm....  I started my business career delivering newspapers for Newsday at the age of 11.  My contact was a fellow named Bernie, sorry no last name; he drove the box truck that had newspapers bundled in batches of fifty for all the delivery boys.  He’d toss them on the ground behind the supermarket and we’d load them on our bicycles.

Next on the list of jobs was Maber Egg Company here in Houston.  I might have been 14 at the time; but lied about my age, said I was 16 to get the job.  I got fired for getting into an egg fight with the boss' son, a fight I won hands down.

Another of the ‘kid jobs’; Harry Martin Catering Company, where I started out as a vendor selling peanuts, popcorn and soda at the Astrodome.  Eventually I became a member of a commissary crew filling soda cups for the other vendors.  That’s where I met Lucy, the love of my life; she was the popcorn girl.

Add to the list, Sewell’s Texaco, Montgomery Ward, the Houston Police Department where I retired after twenty years of service and of course, T. F. Stern & Company, where I’ve been applying my skills as owner and locksmith since 1978.  If I’ve left off any jobs, chalk it off to old age; but it looks mostly complete.

Lucy’s locksmith license arrived in the mail yesterday, a license she has no need of since she’s listed as a co-owner of the business only and has never pretended to be a locksmith.

I’m still waiting for Ryan Garcia, a paid employee for the State of Texas to return our phone call.  Sure hope I pass the background check; either that or start work at my next job, Brain Surgeon, at least they don’t require a DD 214.

This article has been cross posted to The Moral Liberal, a publication whose banner reads, “Defending The Judeo-Christian Ethic, Limited Government, & The American Constitution”.
Posted by T. F. Stern at 10:54 AM 0 comments