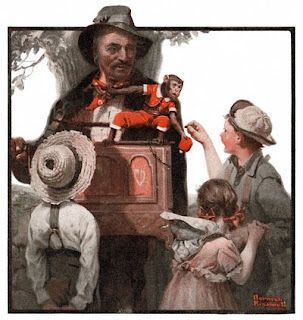 I doubt if many have actually seen an old fashioned organ grinder, a street musician from antiquity; with or without a fabled monkey collecting donations from a crowd of equally disadvantaged onlookers. We’ve immortalized them through the magic of cinematography; but the latest versions of organ grinders are quite different according to an article originally found in the Washington Post and shared by Fox News on their website.

“The United Network for Organ Sharing (UNOS) – the nation’s organ-transplant network – is considering a change in its policy by giving younger, healthier patients preference versus older, sicker people, The Washington Post reported.”


I have no issue with UNOS policy as pertain to “younger, healthier patients over older, sicker people”. UNSO is a private sector non-profit organization, not an arm of government, with a very specific goal, to do the best job of matching donors with those in need. They make use of limited resources and that means making tough decisions as to who can receive precious donations. It isn’t unreasonable to factor in longevity probabilities of those requesting a kidney, liver or other life prolonging organ.


Those who have plenty of funds will always figure out a way to “beat the system” ; but the rest of us have to depend on insurance or even luck. Medical insurance companies exist strictly on their ability to determine numerical odds; can they make a profit in the long run or will a particular procedure be the same as pouring money down the toilet. Insurance companies, out of necessity would rather young and healthy persons receive an organ donation; they’ll be able to continue paying into the system quite a bit longer and justify the expense.

HMO’s are bad enough; pencil pushers making sure the ledger come out in the black taking precedent over a doctor’s diagnosis, additional expense to the company. Do we really want government, already know for its many failures in character involved in health care industry decisions, decisions which determine who gets expensive procedures against those who’ve already had their best years gone by?


Let me put it another way; this morning I mentioned my back was bothering me and Lucy suggested I visit the chiropractor. Business has been slow for an extended period (it seems to match the time when Obama took office) and I’d rather put up with a little more pain than trade hard to come by money for a little pain relief. The important part of that lesson; the decision was made not to spend money by me, not some government bureaucrat. I didn’t impose on my neighbors either to pay for pain relief; they have their own problems.


My insurance covers chiropractic treatment; but there’s a “co-pay” and I have to weigh the benefits gained with how long that relief might extend into the future. Some folks say they can be pain free for days after getting “cracked”. If that were the case then maybe forty dollars would be worth it; but after I’ve been “adjusted” the pain returns in only a few hours, so unless I have plenty of “money to burn” it’s hard justifying the trade off. Other bills are higher on our list; I’ll just take a pain pill and get back to work.


If government had made the same decision for me, “You can’t visit the chiropractor because, according to our statistics, folks your age don’t get extended relief from these procedures”; then by Jiminy I’d be mad as a wet hen! That’s the difference between a free society and a totalitarian socialistic collective. Unfortunately, America is going down the path which takes important decisions out of the hands of individuals and places them in the hands of government bureaucracies appointed by elected folks.


Norman Rockwell painted a picture of an old organ grinder cranking away to make his music, a cup held curiously by a small monkey whose antics made children smile as they willingly exchanged a coin or two from down in their own empty pockets. In the modern version, instead of a silly monkey you’d only feel your wallet being picked by a passing government ape; so much for my organ grinding story.


This article has been cross posted to The Moral Liberal , a publication whose banner reads, “Defending The Judeo-Christian Ethic, Limited Government, & The American Constitution”.
Posted by T. F. Stern at 3:39 PM

"Business has been slow for an extended period (it seems to match the time when Obama took office)..."

Funny that isn't it, especially when he was the one prattling on about jobs and saving the world, not to mention calming the seas.

"...America is going down the path which takes important decisions out of the hands of individuals and places them in the hands of government bureaucracies appointed by elected folks."

And being someone who lives in such a country, i can also tell you, they're not truly accountable for anything to anyone, not even the worthless fools who appointed them in the first place.