Assault Weapons Belong on the Battlefield 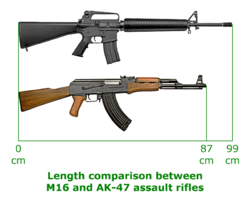 This past November, as recorded by countless news briefs, talk radio and internet forums, the Senate passed the National Defense Authorization Act, (S.1867).  President Obama demanded a provision be included which would “permit the federal government to indefinitely detain American citizens on American soil, without charge or trial, at the discretion of the President”

In support of this harmful bill, Sen. Lindsey Graham (R-S.C.) explained that the bill will “basically say in law for the first time that the homeland is part of the battlefield” and people can be imprisoned without charge or trial “American citizen or not.” Another supporter, Sen. Kelly Ayotte (R-N.H.) also declared that the bill is needed because “America is part of the battlefield.”

In other words Obama and the Senate have designated the land within our borders a battlefield and included American citizens as possible enemy combatants who have no constitutional rights; pretty slick, sounds like a third world dictator’s dream.  (If you’re keeping track all 57 states Obama visited while running for the presidency are affected by this new law.)  This is old “news” to anyone paying attention; let’s move the clock up to the present.

Real Clear Politics ran a story on their website this morning, Obama: AK-47s Belong In The Hands Of Soldiers, Not Citizens.  President Obama, speaking to the National Urban League convention in New Orleans, “I think we recognize the traditions of gun ownership that passed on from generation to generation. That hunting and shooting are a cherished national heritage.”

Notice how progressives marginalize ownership and use of weapons as if rifles, shotguns and pistols were reserved for hunting or sporting purposes as part of “our national heritage”.  If you read between the lines “our national heritage” is the same as a government entitlement, not exactly what the founders said about the purpose for an individual’s God given right to own and bear arms.

“A free people ought not only to be armed and disciplined; but they should have sufficient arms and ammunition to maintain a status of independence from any who might attempt to abuse them, which would include their own government.”  George Washington

Obama didn’t stop there as he continued to move his anti-gun agenda forward.

“But I also believe that a lot of gun owners would agree that AK-47s belong in the hands of soldiers, not in the hands of criminals. That they belong on the battlefield of war, not on the streets of our cities,”

Obama thinks, and would have us believe, citizens who own AK-47’s, AR-15s or any number of military style weapons are criminals; in essence that’s what he said.  Obama then added, these assault type weapons belong on the battlefield of war.

This past November Obama pushed to have the Democrat controlled Senate pass the National Defense Authorization Act and together they did just that.  Obama demanded the bill include a provision giving the president broad powers for dealing with citizens who stand up to authorities making them enemy combatants.  America has been declared a battleground which suggests having an AK-47 or AR type weapon is a good investment for defending personal liberties.

Mr. President, you signed the National Defense Authorization Act into law proclaiming the streets in our cities battlegrounds open to your interpretation of which citizens might be enemy combatants so you could remove them from society without formal charges, without legal council, without a trial and keep them locked away indefinitely.

You can’t have it both ways; either we are American citizens with a God given right to protect ourselves from a tyrannical government with battlefield grade weapons of equal or superior strength to those who would lord over us or we have already become subjects to a totalitarian régime.  The spirit of America lives within the rule of law and is protected by the Constitution; Mr. President, you are the enemy!

This article has been cross posted to The Moral Liberal, a publication whose banner reads, “Defending The Judeo-Christian Ethic, Limited Government, & The American Constitution”.
Posted by T. F. Stern at 9:51 AM