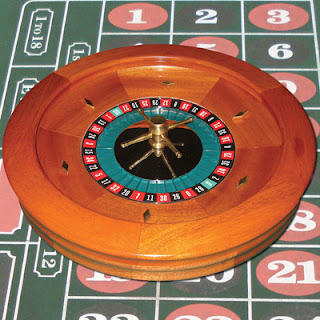 There was a television documentary on gambling devices; particularly the manufacturing and use of roulette wheels.  The odds of winning at roulette are about 38 – 1 for a single number play if the roulette wheel incorporates Green Zero and Green Double Zero.  Any way you look at it the house has the advantage; so why go to the trouble of altering the outcome, rigging the wheel to make the little white ball land where you want it?

There have been all manner of ways the ‘house’ has manipulated roulette wheels mechanically and electronically, at least that’s part of its history.  The dumb rube puts his money down thinking he has an ever so slight chance of coming out on top and, unbeknownst to him, the rules of ‘chance’ aren’t in play because the house knows which number the ball will land on before the wheel is ever spun; isn’t that how movies portray a rigged game of ‘chance’?

In case you missed it, today’s article isn’t about gambling at the roulette tables or even about some of the shenanigans which may or may not continue to make the public weary of playing the odds on that jumping little white ball.  (If you’re interested I have a system that is guaranteed to pick winning numbers on Roulette as well as the Lottery; just send me $5.99 along with a stamped self addressed envelope for this proven path to riches)

John Boehner, you might recognize him as Speaker of the House, …Boehner stood at the podium and called for mob rule; I mean, a voice vote to amend procedures on how delegates could be recognized and cast their votes within the Republican Party.  The details of the procedural change are important; but that’s not what got my blood boiling. It was how that procedural change was finalized and put an exclamation mark on how far the old guard GOP power mongers will go to hold onto that power.  They are willing to destroy all that is worth keeping; they rigged the outcome well in advance of any discussion.

I watched a video in disbelief as Boehner went through the motions of obtaining input from the attending delegates (mind you, some of the important delegates had been magically kept from attending this vote and were stranded on buses that went past the convention hall without stopping 3 times), all the while reading the results of that inquiry from a teleprompter (fast forward to the 3:15 on the video) handing him his lines.

“In the opinion of the Chair (an opinion which was established in a back room long before this staged convention started), the “ayes” have it (those other noises must be a blower in the A/C unit about to give out) and the resolution is adopted.

Without objection (define objection), the motion to reconsider is laid upon the table.”  (Forgive my reading between the lines)

We’ve been shown the kind of leadership old guard Republicans use, open minded and fair dealings; yea; right!  There really isn’t much difference between progressive Democrats and the old guard GOP; both are enemies of ‘We The People’.

I read an article by Michael "David" Bellow Jr. at his blog and would have to agree with him:

How much damage has been done to the Republican Party by the old guard, unwilling to even listen to opinions from within their own party?  Will those who’ve been slighted sit out the next election or cast their vote on a third party candidate as a means of expressing their disgust?  Either way America could get stuck with four more years, four more intolerably Marxist years which this nation can ill afford.

When the “good guys” use totalitarian tactics to stifle their opposition it makes many of us wonder if voting for the ‘lesser of two evils’ isn’t the same as voting just a different face of evil.  If this were a roulette wheel I’d be looking for magnets under the table.  (Some of you might be silently happy I didn’t use the game of Craps as my example; for some reason the letters SOL come to mind.)

This article has been cross posted to The Moral Liberal, a publication whose banner reads, “Defending The Judeo-Christian Ethic, Limited Government, & The American Constitution”.
Posted by T. F. Stern at 12:53 PM

What? No comment on how Ron Paulistas tried to rig the game to have 300% (minimum) more representation than the votes they got? Sure, the rules committee slapped 'em down, but in a display of class, Romney actually intervened to get then half the seats in the MA delegation (they'd rigged it to have 'em all) even though they only had about 5% of the primary vote. Oh, "rigged it"? Yep. Crowded out othrs who made the MA convention (as they did elsewhere in gaining more delegates than they could legitimize with actual votes) and simply railroaded the state convention to steal delegate spots.

David; Your comment is valid; however the more I watch the manner in which the GOP goes about their business the more I'm convinced there is little difference if any from those of the Democrat Party as both appear to be corrupted beyond use in our constitutional republic. It is disheartening to see the standards of our nation taken to such low levels. I'm sure our founders are spinning in their graves as they watch what we are doing toward the end of this Great Experiment in self governance. Thanks for commenting; always welcome.

In recent years I've had to revise the relative speeds upwards for both parties.

Folks like Paul Ryan--and a very few others--in the Stupid/Repugnican't Party are trying to put on the brakes, but it's a tough gig when "conservative" generally means "socialist lite" nowadays.

Thank you, thats very interesting information. I need to share with my friends.