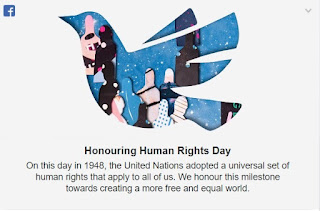 Where to begin, oh where to begin?  The United Nations Council on Human Relations, sometimes referred to as ‘Third World Thugs in Suits’, wants everyone to understand how important human rights are as we go about making the world a better place.

The image of a dove or perhaps the Blue Bird of Happiness popped up on Facebook as we are reminded to support the United Nation’s efforts, truly a worthwhile goal.

Really, human rights for everyone, that’s the goal?

Does that include women under the control of Sharia?  Saudi Arabia and Iran spearhead the United Nations Council on Human Relations.  What example are they setting for the entire world to follow?

Under Sharia, (not limited to nation states claiming to be under Islamic control), women are subservient to men and may be beaten to a pulp just for being a woman.

“For example, according to Q 4:34, husbands are allowed to beat their wives if they “fear disobedience” (which implies that actual disobedience need not occur for the beating to be justified)”

What does Islam have to say about murder, rape and enslavement of women?

“The fact is that ISIS militants in Iraq and Syria, who are notorious for raping Yazidī women who they capture (sometimes shortly after killing their families and neighbors), are clearly acting within the interpretive parameters of traditional Islam and following the example of the Muhammad of the earliest Islamic sources.”

Ahhh, the joys of universal human rights as set down by those running the United Nations…  May we all embrace the examples we have been shown as we work toward becoming one big world order family.

This article has been cross posted to The Self Educated American, a publication whose banner reads, “Standing Fast By the Judeo-Christian Heritage, Limited Government and the U.S. Constitution”.
Posted by T. F. Stern at 2:54 PM