Election Day is almost over with the sun going down and the polls closing; the opportunity to count and tally the votes to see which candidates will take the reigns of office.  There’s an air of trepidation and concern for our future.  Will the war on American industry continue as the EPA ties the hands of oil and coal tighter to the point of breaking or is there a change in the works, a change which might turn things around enough to open up jobs for those anxiously looking for work?


I was watching an old movie, A Tree Grows in Brooklyn, which reminded me of the desperate measures so many have taken to keep their heads above water (no pun intended for the misery caused by flooding in and around the New York area caused by the hurricane).

Johnny Nolan, an immigrant with a beautiful Irish Tenor voice made less than a meager living singing at weddings and such; but for the most part was out of work, leaving his family to scrape to make ends meet.  His wife scrubbed floors and did all manner of odd jobs; even so they were paupers with little to be cheerful about.  One evening Nolan came home to find the family had moved to the cheapest apartment available, the previous owner was unable to take an old piano which he sat down and played an old Scottish tune, Annie Laurie; realizing his inability to work steady had taken a terrible toll on his family.

How many folks across America have these dark thoughts, watching time flicker by and hoping beyond hope to find gainful employment in our faltering economy?  Being unemployed leaves a hole in your soul, an emptiness which gnaws at you and never goes away.

The current administration boasts we have an economy in recovery mode, only 7.9% unemployment as if telling folks who’ve been out of work for an extended period will find something to be happy about.  The facts show otherwise; the real unemployment numbers are closer to 25%; but expecting the Obama administration to be honest about anything; well, let’s hope today’s election brings about a change in administrations too. 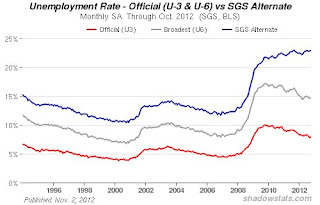 When Obama took office he promised that if he didn’t turn the economy around in four years he expected to be a one term president.  I’m holding my breath waiting for the results of today’s election, a chance to sing something other than America’s dirge, the Unemployment Blues.

This article has been cross posted to The Moral Liberal, a publication whose banner reads, “Defending The Judeo-Christian Ethic, Limited Government, & The American Constitution”.
Posted by T. F. Stern at 6:47 PM