The counting is over and Barrack Obama will have four more years; so congratulations for having duped enough voters, again (as Forrest Gump would have added).

You may recall the first time Barry Soetoro, I mean Barrack Obama, took the Oath of Office it had to be done a second time because Chief Justice Roberts got the words jumbled up and Barry repeated the error. 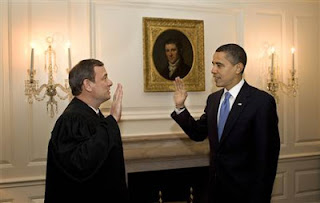 I’m wondering how Barrack Hussein Obama will act on inauguration day as he places his hand on the Holy Koran and pledges, to Allah, to uphold the Constitution as president.  Will he proudly use Hussein this go around, a name that links him more closely to Islam and the Muslim Brotherhood or will he continue being Barry Soetoro Obama?

Obama can do what he wants since he won’t have to bother with the voice of the people in another election; but I forgot, Obama’s more into expressing the dreams of his father than listening to the voice of the people.  Imperial America must be transformed from its colonialism days and made to pay a measure of tribute, a redistribution of wealth to those around the world who had everything stolen by capitalist pigs.

Will Barrack Obama, Barrack Hussein Obama, or what ever he wants to be called have a teleprompter in front of him so he can repeat those important words or a device in his ear similar to what he did during the debate so he could repeat whatever was needed at the right moment?  Obama despises America to such a degree I wouldn’t be at all surprised to see him roll his eyes and say, “Yea…”, breathing out his contempt for a document and the nation which he’s been ignoring all this time, “...whatever”.

Some years back my brother’s youngest son came over from Europe to live with us; a chance to attend high school here in America.  Nathan had been home schooled by private tutors and the level of his education was superior to anything he might obtain here; but that was only part of the reason for his extended visit.  Nathan wanted to learn more about America first hand and living with relatives would give him a chance to do just that.

Listening to Nathan’s British accent was like having the BBC or NPR (same difference) right there in our living room.  My grown children had their way of letting us know things were “Bor-ing” while Nathan had his distinctive, “What-Ev-er”; a three syllable word with exclamation marks along the way, a double exclamation mark in the middle which beat boring hands down for effect.

I never quite mastered the art of saying What-Ev-er with the same level of sarcasm because British is a foreign language to Americans.  Over here “whatever” is subdued as it leaves the lips, intentionally directed away from the listener’s ear while the British version is a slap to the cheek to get your attention.

I’m afraid Obama would use the subdued version since he doesn’t really care about his oath of office; just has to repeat it while holding his hand to the square as if he means it.  “Can’t we just get this over with so I can get on with America’s transformation from a liberty loving nation of individuals into the collective my father dreamed of, a few notches down from the capitalistic imperial land grabbing beast of years gone by?”   Yea…whatever is how Obama sees the Oath of Office, the oath he’ll take in January.

This article has been cross posted to The Moral Liberal, a publication whose banner reads, “Defending The Judeo-Christian Ethic, Limited Government, & The American Constitution”.
Posted by T. F. Stern at 9:46 AM

Sad day for your country TF, i feel for you folks. Wish it were different, but it ain't.

Yes, it feels like I went to my own country's funeral. Things will only go down hill from here I'm afraid because there are more folks here who think socialism is better than what we Had.

eToro is the ultimate forex broker for rookie and professional traders.